The impact on Finance Departments of Big Data 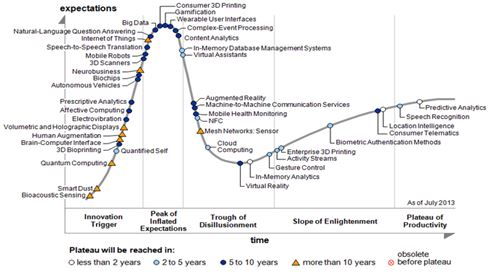 The concepts behind Big Data have been around for a while now, moving from niche marketing to almost mainstream over the past few years.  Whilst the term Big Data means many things to many people it is now much more than a set of interesting new technologies.  It has become for some organisations a business imperative, providing solutions to changing customer demands sometimes transforming business processes, organisations and entire industries.  And whilst there is still an awful lot of hype around the term, the impacts from being to analyse these vast, disparate, often unstructured data sources and make decisions are changing long standing business models. The hype around Big Data

How though do you get beneath the marketing gloss and determine how to make sense of this explosion in data points.  Data in itself is not information nor does it make decisions.  Neither is Big Data the preserve of big enterprises with big budgets.  As with all new technologies there is an adoption cycle starting with innovators, moving from early adopters through the early majority, late majority and followed by the laggards.  Gartner have identified a hype cycle for emerging technologies, not all of which make it, that moves from the initial expectation of the technology to an inflated expectation, falling into the trough of disillusionment, finding a slope of enlightenment and ending on a plateau of productivity.  Gartner sees Big Data now at the top of the hype cycle, often the point at which the early adopters get going.  In practical terms we see a split emerging between the technologists promoting a raft of open source tools and business users trying to get something usable out of this vast bucket of data.

So is there an impact on Finance and if so what is it?

If we look at Finance departments most teams are still  undertaking an annual budget process with differing approaches to forecasting in place across the year, some monthly, some quarterly and  some on a rolling basis.  Quite often it is focused along the lines of ensuring the chart of accounts adds up to the right level of profit.  How far from the world of big data can this be?

If we get under the skin of the classic approach to budgeting and forecasting though, many Finance teams take a keen interest in the detail behind the sales forecast – how robust are those numbers, what evidence is there to support them etc?  Equally questions such as what are the resourcing requirements to deliver on those objectives, whether it be people or productive capacity need answering.

Whilst the details vary enormously across industries, most sectors are impacted by the move to a digitised society – the foundation of big data – in some way or another by what have become to be known as the four V’s of Volume, Variety, Velocity and Veracity.  Social sentiment on Twitter and Facebook can impact the sales of consumer goods; telemetrics in cars enable insurance policies to be written on a variable basis based on driver behaviour.  Without taking into account these new or emerging impacts on business models, the drivers of revenue and costs will not be properly accounted for or included in the forecasting process.  New entrants to once impenetrable markets such as banking can quickly erode revenue streams- crowd funding and alternative payment mechanisms such as Paypal and Bitcoin.

The recently formed body, CGMA – a combination of the UK’s CIMA and the US’s AICPA, has written a paper on just this topic, on how to ready businesses for the big data revolution.  They observe how some early adopters in the use of big data and advanced analytics have already enhanced both their operational performance and their competitive position.  Not all Finance teams may yet be using the technologies of big data but the digitisation beneath it is disrupting traditional business models.  Finance teams need to take note of these changes to analyse the impacts and ensure they are incorporated into the planning and reporting processes of their organisation.  One of our customers in the media publishing sector found that almost overnight the sale of physical products from their website moved to pay per click on various download sites.  The change in business model was quick as was the move from traditional accounting and forecasting to analysing clickstream data from multiple sources to understand revenue, royalties and margins – a great example of the four V’s at work.

So to answer the question, there is an impact on Finance teams from Big Data and it is closely aligned to the ways in which they plan, report and analyse the data driving an organisations performance.

BACK TO NEWS & EVENTS

Putting the ‘A’ back in FP&A

Finance 2030: Four imperatives for the next decade